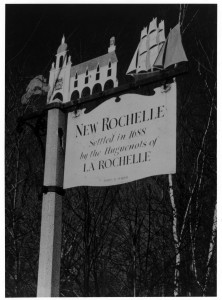 The community of New Rochelle has an extraordinarily varied long history. Founded by French Huguenots seeking religious freedom in 1688, the community was one of the New York area’s premier American suburbs by 1900. Covering over 325 years, the events, people, and places are well-documented in the library’s extensive Local History Collection. It is the largest repository of archival materials and resources related to the New Rochelle’s heritage and contains general materials as well several specific, important collections, both offline and online.

The Local History Collection continually grows through donations from the public. It now includes over 2,500 non-circulating books, pamphlets, maps and atlases; as well as several hundred oral histories, close to 10,000 photographs and postcards, and over 55,000 reproduced newspaper and magazine clippings. Library staff and volunteers steadily work on the unending task of processing materials for online accessibility.

On April 6, 1917, the United States declared war on Germany. 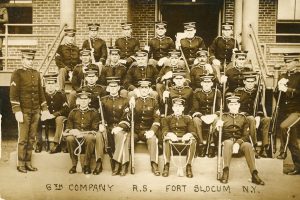 Like other communities across the country, New Rochelle residents did their part to support the Americans fighting overseas by raising money for liberty bonds, buying War Stamps, mobilizing Red Cross volunteers to make bandages, conserving food and energy, and lending patriotic fervor to boost morale.

Unlike other American municipalities, New Rochelle’s World War I years were unique: 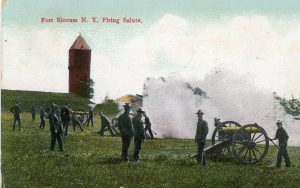 A hard cover book, New Rochelle: Her Part in the Great War, was published by resident Conde B. Pallen, the publisher of the Catholic Encyclopedia, in 1920. It included “historical and biographical sketches of individuals and organizations who rendered valuable service to their country during the great World War.” Two thousand copies were printed before the type was destroyed. Fortunately, a scanned version can be found on-line today. Copies are also available for viewing in the Library’s E.L. Doctorow Local History Room. The book concludes with a listing of New Rochelle men who served in the war and a listing of all those who died in WWI active duty. Scans of those pages can be viewed here. We’ve also included an annotated list of the New Rochelle men and the one woman who died while in active duty, can be found here. 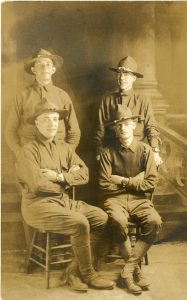 Photographs of many of those who died in active duty are part of the Library’s Local History collection. Forty metal plate photographs of New Rochelle men killed in World War I were first exhibited at the former New Rochelle Public Library, on Main Street and Pintard Avenue, in 1938. The plates were created from professional studio portraits. In some cases, military uniforms were “added.”  In 2010 the Friends of the New Rochelle Public Library provided a grant to have digital reproduction made of the plates, and to have the plates professionally conserved. The digitized images, as well as scanned images of the original studio portraits can be seen here.

Barbara Davis, now City Historian, wrote an article about a unique and highly significant WWI event that occurred in New Rochelle in December, 1918. Click here to read her articles, which appeared in the Standard Star newspaper on December 15 and 22, 1994. 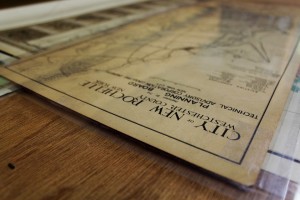 History Room is accessible to the public during the library’s regular operating hours.

Guidelines for using the E. L. Doctorow Local History Room can be viewed by clicking here.

An Index to the materials in the room is an excellent starting point and can be viewed clicking here.

Copies of the NRPL Photograph Collection I 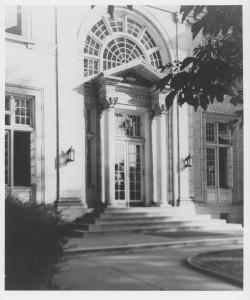 This collection is made up of over 1,000 photographs donated by former New Rochelle police detective, Dominick Bruzzese, the Huguenot-Thomas Paine Historical Association, and other individuals. In 1988, these photographs were reproduced on acid-free paper with funds provided by a Discretionary Grant from the New York State Program for the Conservation and Preservation of Library Research Material. These reproductions are filed in five notebooks according to subject (for example, churches, clubs, streets, business, and the waterfront). There is also an extensive index for the collection. NRPL has another approximately 5,000 vintage photographs currently being processed. Policy regarding requests for reproductions.

Richmond and Telephone Directories from 1900

Yearbooks of New Rochelle High School and other local schools

Past and present, including budgets, environmental impact statements, and other records requiring public access.

The Library maintains five oral history collections. Originally recorded on audio cassettes, the collections are now digitized as a result of the 2010 Institute of Museum and Library Services (IMLS) grant-funded project, Voices of the Hudson Valley: Bringing New Technology to Old Stories for 21st Century Audiences, of which NRPL was one of five participating libraries/museums.

The New Rochelle Tricentennial Oral History Collection was the result of a project conducted in 1988, for the city’s 300th anniversary observance. Forty-one long term residents were interviewed, and their recollections about New Rochelle were captured on audio cassettes that were copied, indexed and, for the most part, transcribed.

The Antonio Valencia Oral History Collection was first developed through a 1999-2000 New York State Archives and Records Administration (Documentary Heritage) grant, “Documenting the Mexican Community in New Rochelle,” to record the migration of tens of thousands of people from Michoacán, Mexico  to New Rochelle, beginning with Mr. Antonia Valencia in 1954.

The Davids Island/Fort Slocum Oral History Project was conducted in conjunction with the federal government’s clean-up of the former military base located off New Rochelle, and the historic preservation mitigation.  The United States Army Corps of Engineers recorded two dozen oral history interviews with former Army personnel, civilian employees, dependents and others associated with the post at one time or another from the 1920s onward.

Voices of Reflections of Change Project was begun in summer 2010, as part of a year-long observance of the 50th anniversary of New Rochelle’s landmark desegregation Case: Taylor vs. the New Rochelle Board of Education. Three trained high school interns and the City Historian completed digital recordings of interviews with residents impacted by the case and its decision.

The current NRPL Oral History Project, initiated by the City Historian/NRPL Community Relations Coordinator, is an on-going project to capture the reminiscences of long-term residents. Approximately 30 additional audio cassette and digital recordings have been completed over the past 10 years.

In the Archives Center, materials too fragile or valuable for regular use are kept, including:

The manuscripts in this collection date from 1790 to 1940, with the majority of the documents from the 19th century. They are primarily items from private individuals such as letters, receipts and copies of land documents, and include specific series such as the Harold Smith Collection, detailing the life of a leading citizen. Public records include papers of the Commission of Sewers and Drainage. The collection also includes pamphlets and publications about New Rochelle, such as “The Tattler” and “They Say,” two weekly publications locally-published in the early 20th Century, and “the Preserver”, produced in the late 20th century and early 21st Century. 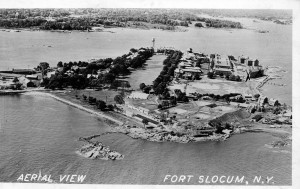 From 1861 to 1965 David’s Island in New Rochelle served our nation as a post of the U.S. Army. Fort Slocum, was a US military post which occupied Davids Island from 1867 – 1965. The fort was named for Major General Henry W. Slocum, a Union Corps commander in the American Civil War. From 2004 to 2008 the U.S. Congress authorized funds to demolish the remnants of the post and prepare the island for a new use. This resource was created to help preserve an important part of New Rochelle’s local history and our national heritage. This collection was instrumental in the development of the website, The Army’s Century on David’s Island.

This collection consists of LPs and digitized recording and materials pertaining to one of the first African American women to perform in leading concert halls. Ms. Davis (1907-1960) was a New Rochelle resident.

This collection consists of programs, invitations, newspaper clippings, a few works of original oil painting, and prints chronicling the long history of the nationally recognized Association. Twenty years ago, the Smithsonian Museum borrowed the collection and made copies.

The signs, strategically located in the gardens lining the Library Green pathway were created and funded by former resident and historian Roderick Kennedy Jr., working in partnership with the Downtown BID, the New Rochelle Department of Parks and Recreation and City Historian, Barbara Davis.

Each inductee of the Walk of Fame is memorialized with a 20” x 14” full color historical interpretive signboard telling his or her story in words and graphics. The Walk of Fame is a micro history of America as reflected in the lives of New Rochelle’s famous sons and daughters, representing the arts, business, politics, education, the media, entertainment and sports.

The Library has a large Clippings File of some 55,000 items, obtained from local newspapers, magazine clippings, New York Times items, obituaries, local associations and art show programs, etc., since the 1920s. The clippings are organized in categories and are located in the bank of file cabinets outside the Local History Room.

This collection contains reels of microfilmed New Rochelle papers, beginning with the late1800s (New Rochelle Paragraph and New Rochelle Pioneer,) and continuing through the 1900s (the Evening Standard and then the Standard Star). 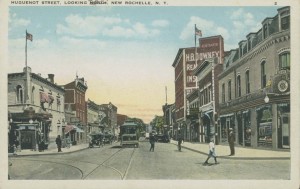 The postcards from this collection, approximately 950, date from the late 1800’s through 1970, with most representing the period known as the Golden Age of Postcards, 1907-1915. Depicting many aspects of life in New Rochelle, they document the development of downtown New Rochelle, waterfront, and select neighborhoods; giving us a glimpse of New Rochelle coming into its own identity as one of America’s premier suburban communities. Most items are from the Dominick Bruzzese and Karen S. Allen Collections with the majority of the Fort Slocum images being a gift of an anonymous donor. Additional materials to the collection are via gift or purchase. 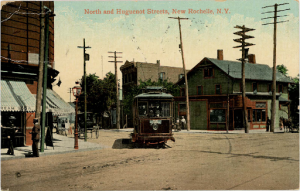 The postcards from this collection, approximately 950, date from the late 1800’s through 1970, with most representing the period known asthe Golden Age of Postcards, 1907-1915. Depicting many aspects of life in New Rochelle, they document the development of downtown New Rochelle, waterfront, and select neighborhoods; giving us a glimpse of New Rochelle coming into its own identity as one of America’s premier suburban communities. Most items are from the Dominick Bruzzese and Karen S. Allen Collections with the majority of the Fort Slocum images being a gift of an anonymous donor. Additional materials to the collection are via gift or purchase. You can find the postcards here.

Since its founding in 1688, New Rochelle, NY has become “home” to great numbers of new immigrants and migrants from the deep South. Their stories, as similar in promise as they are varied in cultural details, are represented in a collection of oral history interviews from 1988 – 2013: New Rochelle: Diverse Voices, One Community.

The narratives of this collection provide powerful testaments of the centuries-old challenges of crossing geographical — and cultural – borders. As this suburban-urban community continues attracting newcomers from all parts of the world, we hope that New Rochelle: Diverse Voices, One Community, will provide a springboard for conversations. The stories help us think about the common threads of immigrant/migrant experiences, the contributions that endure, and the impact recent immigration to New Rochelle may have on its future. Listen to the oral history collection here. 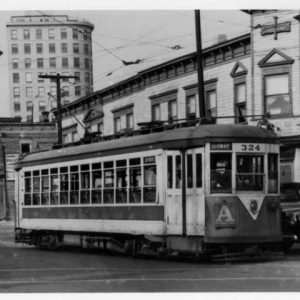 The photographs in this collection, approximately 10,000, date from 1850 to present and chronicle the changing face of New Rochelle. Included are rare photographs of historic houses and daily life from the 19th century, the emergence of the downtown business district from dirt lanes to a bustling commercial district, scenes of people enjoying the waterfront and observing with pride the 225th and 250th anniversaries of the city. In addition to historic views there are images of prominent writers, actors, and musicians who lived here, as well as Veterans of WW I. Most of the items come from the collections of Dominick Bruzzese, the Huguenot and New Rochelle Historical Association, and the New Rochelle Tricentennial Commission. You can view the Historic Photographs collection here.